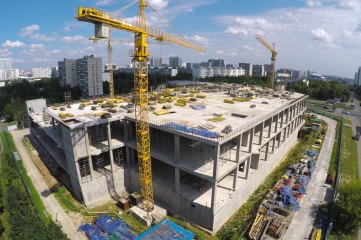 There is plenty of financing available for real estate development, but the public debt markets could be affected if Congress raises certain taxes, a panel discussion noted at this week’s Urban Land Institute Virtual Spring Conference.

“I think there’s a lot of opportunity. There’s a lot of capital out there. You can see it when you’re going out there for deals,” said Vicki Mullins, executive vice president and chief financial officer for master plan developer Newland Real Estate Group. But the market is getting a little frothy and therefore deal underwriters have to be careful in what they do, she added.

Capital sources have been asking Newland about single-family rental property construction, and for the first time, the company is including such homes in two communities under development in the Carolinas.

“As a developer of master plans, we appreciate this product,” said Mullins. “It expands product segmentation and brings renters to our communities who could someday be a future homebuyer.”

In the public debt markets, convergence of three factors are creating many funding opportunities for development, said Thomas Toomey, chairman and CEO of real estate investment trust UDR. The first involves the growth of index funds.

“Index funds buy on an equity weighted cap,” Toomey said. “And so we have this constant buying pressure as the enterprise grows out of that flow.”

Another factor are dedicated real estate investment funds, which previously split their money among offices, hotels and malls, the property types most affected by the pandemic. In the past year, they have been diversifying their development finance portfolios by moving into asset classes that are perceived as safer.

“Single family rental, warehouses and multifamily have been the winners in 2020 and probably will continue for some time until that reweights,” Toomey said.

There’s also an influx of foreign capital that is “looking at the stability of our economy, and recovery, out of COVID and saying, ‘We really liked the cash flow, the dollar is probably going to remain weak for some period of time, we think our purchasing power is up on a growth adjusted basis,” said Toomey.

But capital flow could be disrupted if Congress were to raise certain taxes. He pointed to a potential increase in the capital gains tax as well as revisions to Section 1031 of the Tax Code, which permits tax-deferred exchanges of real estate. Those could be more of a disruptor than rising interest rates.

“Rates, when they go up, don’t seem to have that great of impact on our markets, or our capital transaction flow,” he said.

In a separate session, panelists expressed concern about the negative impact of rising construction costs, including higher prices for lumber and other materials, as well as rising labor expenses.

For example, steel is up 25% in the last three months and lumber is up 240% since last March of last year, said Mark Weisner, president of Bozzuto Construction. “All of these are [creating] an extreme pressure on the market and what the hard costs for our construction projects will be,” he said.

But the low interest rate environment for project financing has helped to mitigate the effects of those rising costs, said Hilary Goldfarb, senior vice president and regional development manager for Rockefeller Group.

While there is volatility in material costs, “on the capital market side, especially given our low interest rate environment, there is real liquidity,” said Goldfarb. “So [project] sponsorship matters but we have seen low debt and favorable equity terms.”

“We were fortunate to be able to close five deals last year that experienced minimal increases in construction costs and we were really able to absorb that by the savings on the interest rate reductions that were very timely,” McAfee said.

For 2021, given the typically long development cycles for affordable housing — which often use subordinate financing from local entities — Wesley looked at diversifying the product type to include those “that may not have some of the exposure to some of these commodity volatilities such as rehab versus new construction,” McAfee said. “We’re doing three rehab deals this year, and one new construction project that was able to lock in lumber at a dip point, versus the highs that we’re experiencing now.”