Commercial mortgage originations in 3Q way down from one year ago

Even though commercial and multifamily lending activity rebounded on a quarter-to-quarter basis, the third quarter’s dollar volumes were much lower than a year ago due to the effects of the pandemic, the Mortgage Bankers Association said.

The growth over the prior quarter is more attributable to seasonality, rather than an economic rebound from the depths of the COVID-19 crisis. Government-sponsored enterprise- and agency-related activity also provided key support for the sector. 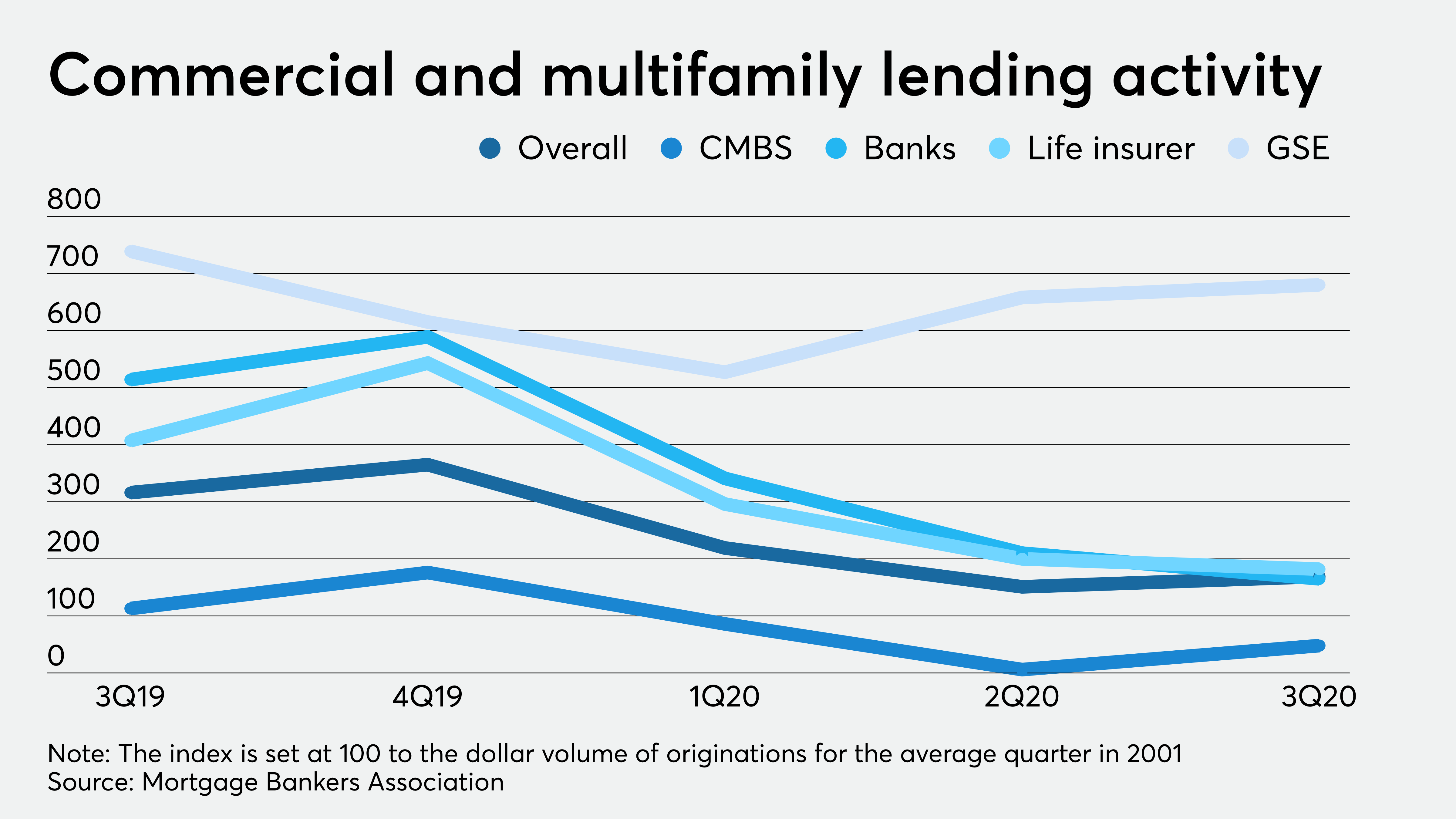 “Originations backed by industrial and multifamily properties saw smaller declines than other property types, with multifamily lending buoyed by loans made for Fannie Mae, Freddie Mac and the Federal Housing Administration”

The MBA’s commercial and multifamily lending index is set to the dollar volume of origination activity for the average quarter in 2001, at 100. In the third quarter the index was 169, up from 151 in the second quarter, but down from 316 one year ago. The index reached an all-time high at 365 in the fourth quarter of 2019.

On a percentage basis, the largest quarter-to-quarter growth among investor types was the commercial mortgage-backed securities market, up 749%, with an index value of 48. In the second quarter, CMBS activity all but disappeared, as seen in the index value of 6 for the period.

Compared with one year ago, CMBS activity was at 116, making the year-over-year drop 58%.

The dollar volume of life company origination activity was down 9% from the second quarter and 55% from one year prior, while for commercial banks it was down 21% and 68%, respectively.

While all property types had a year-over-year decline in origination activity, only hotels and retail saw less activity when compared to the previous quarter. The third-quarter index value for hotel was 20; in the fourth quarter of 2017 it peaked at 656.

Retail has been a troubled sector for some time, hitting troubling lows in recent years. In the third quarter, retail’s index of 24 was down 83% from one year ago.

Separately, the MBA said commercial and multifamily mortgage delinquency rates declined in October from the previous month, but loans already in default are in worse shape than before.

However, “there continues to be evidence of elevated stress, especially among loans backed by retail and lodging properties,” Woodwell said in a separate press release. “The share of loans becoming newly delinquent fell again in October, but a larger share of noncurrent loans shifted to later-stage delinquencies. In essence, fewer loans are becoming delinquent, but those that are delinquent show fewer signs of curing.”

According to the MBA, 94.6% of outstanding loan balances were current on their payments in October, up from 94.3% in September.

However, 3.4% of the remaining loans were 90 days or more delinquent or foreclosed upon, down from 3.5% a month earlier.

Because loans backing CMBS are concentrated in the hotel and retail sectors, it had the highest delinquency rate among the capital sources in October, at 9.9%. But this was down from 10.9% in September.

About 21% of hotel loans were non-current in October, down from 22.1% in September, while 12% of retail property mortgages were late on their payment, compared with 13.3%.