11 Things You Can’t Hide When Selling Your Home

If you’re getting ready to sell your home, or have already put it on the market, it can be tempting to gloss over a few of the negatives. After all, does the buyer really need to know about that ant problem you get in the summer months, or the fight you’re having with your cranky neighbor?

Well, yes, they do. Hiding any kind of problem that will cost the new owners time and money to fix, or make them regret buying the house, could land you in hot water. You may even be sued for substantial damages. Here are some of the biggest offenders. (See also: 6 Things Buyers Will Hate About Your House)

There is a certain stigma that attaches to a property after something terrible happens, and that stigma can affect the home’s value. Any events deemed “psychologically damaging” — such as a high-profile murder — may legally need to be disclosed when selling a home. The specifics will depend largely on your state’s laws.

In California, for example, any kind of death that happened in the home, with the exception of AIDS-related death, must be disclosed if it happened within three years of the sale date. And should the buyer ask if there was a death, suicide, or violent crime at the property, in most states you are legally required to answer truthfully.

2. Any asbestos in the structure

Once upon a time, asbestos was a staple in home construction. Its fire retardant properties, combined with excellent sound absorption and insulation, made it a useful material. This was until, of course, it was discovered that airborne asbestos particles can cause lung cancer, mesothelioma, and asbestosis.

Asbestos is costly and dangerous to remove, and as a seller, you typically have two choices: get rid of it through a specialized firm, or disclose it and tell the new owners it’s their problem. No doubt they will want to reduce their offer so that they can pay to have it removed safely. They may just back out of the sale, too. But if you know about it and don’t disclose it, depending on where you live, you can be sued.

Rats. Bed bugs. Cockroaches. If your home is plagued with pests, most states require you to disclose the issue to the buyers. Even if you have things under control with an exterminator, you’ll still need to tell the new owners that there’s a pest problem they need to stay on top of.

In some cases, the pests may not even come from the home, but from a neighboring property (this happens a lot in apartments in New York City). If you have bugs or mice coming in from another property, still let the buyers know. It’s only fair. (See also: 6 Cheap Ways to Get Rid of Household Pests)

The idea that a house could be haunted is somewhat far-fetched to say the least. However, some people believe in the paranormal. If you, as the owner, genuinely believe your home has an issue with a ghostly presence, some states require that you warn the new owners about it. If you’ve had an exorcism done, that should be disclosed as well.

Lead paint was once used throughout homes because it dried faster, kept its fresh color longer, and resisted mold. It also had a sweet taste, which caused children to eat lead chips, and had the nasty side effect of kidney damage, nervous system issues, and stunted growth.

Any home built before 1978 must have a disclosure form stating whether lead paint is present in the home or not. Hiding this can set you up for a lawsuit. If you genuinely don’t believe there is lead paint in the home, you don’t have to disclose it or investigate the presence of lead paint.

A bad neighbor can turn a beautiful home into a nightmare. And while it’s not exactly legally required to disclose nuisance neighbors (except in California), it’s in your best interest as a seller to tell any potential buyer about the problem.

For example, the neighbor might throw loud parties until 2 a.m. every weekend. To some people, that’s no big deal. To others, it can be a cause of such frustration and turmoil that they find themselves caught in a war, with the police often getting involved. Just be upfront about the issues. If the neighbor is a registered sex offender, you’ll want to disclose that information, too.

Whether the damage was caused by a leaky roof, an overflowing bathtub, a flood, or any other kind of water-related incident, you must disclose this kind of past issue. You may think that because you fixed the leak in the roof or painted over the stain on the ceiling that you’re all good. That’s not the case. There could be damage that you cannot see, especially in the case of a basement flood or leaking ceiling.

The golden rule here is if water has entered the structure and caused any kind of damage, you have to let the new owners know. And if the water has created a mold problem that you have covered up with paint or wallpaper, you have to disclose that as well.

8. Any natural disasters that affect the home

If you’re unlucky enough to live in an area that occasionally gets hit by an earthquake, hurricane, tornado, wildfire, flood, or any other kind of natural hazard, depending on the state laws, you may have to let the new buyers know. This also goes for a home that is near a cliff erosion. You can’t just assume they know the home is located in tornado alley, or that the local river floods every spring. (See laso: What You Need to Know About Filing an Insurance Claim After a Natural Disaster)

The foundation of a home is a big deal, so if there are problems with it, you have to fix them, or let prospective owners know what the issue is and an estimate of what it will cost to repair. According to Home Advisor, the average cost to repair foundation issues comes in at over $4,000, although it can go as high as $11,000 for a serious repair. That’s a big chunk of change that the new owners will have to fork over, and they won’t want to find out after they’ve moved in.

You would probably be better off getting it repaired yourself before putting the home on the market, as any sentence including “foundation problem” and “home for sale” is going to put a lot of people off. They may even think it’s going to cost way more to fix than it actually does.

Most lenders require a separate termite inspection anyway, so trying to conceal it will only come back to bite you. But if you have termite damage and the pesky little critters are still eating away at the structure, the buyer’s lender can back out of the loan. If you had termite damage and had the problem taken care of, make sure you show the new buyers evidence of this. Termite damage is very expensive to repair, so you need to prove that you dealt with it.

11. Any significant repairs or improvements

If you did anything to the property that required a permit to be pulled, you should tell any prospective buyers about that project. If it required a permit and you didn’t get one, it’s even more important to come clean about it. Any large scale projects including a remodel, new roof, major plumbing or electrical work, an extension, and even heating and air conditioning should be disclosed in full.

With repairs, it’s just as important to let the new owner know. It’s possible the issue could return, or that it did some damage that they need to know about. (See also: 9 Easy Home Improvements That Add Thousands to Your Listing) 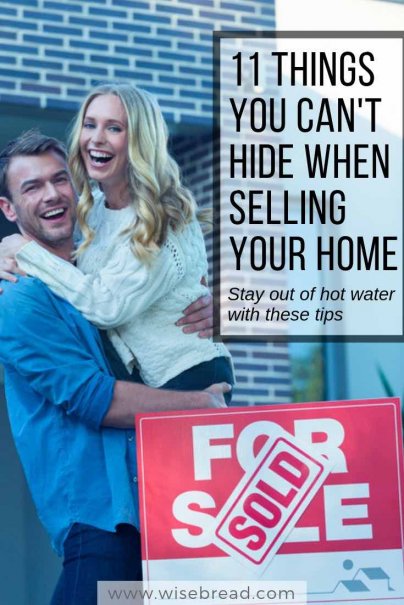 How Buying a House Impacts Your Career

3 Things You Should Consider Before Selling Your House for Cash